↓
CRATE TRAINING
This article is courtesy of 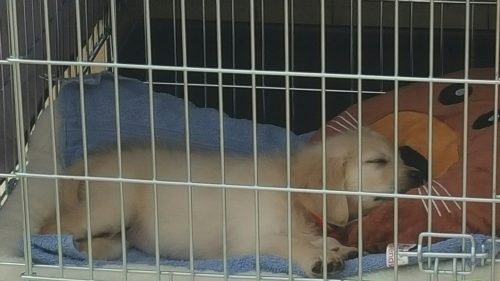 You have just acquired a new puppy or dog, Congratulations!

You have a lifetime of “unconditional love” from your pet ahead of you. Treat him* with as much respect as any new member of your family deserves and give him all the love you have to give!

When you first bring a new pup or dog into your household, it is very important to establish your guidelines and acceptable behaviors for him. Whatever behavior you allow during this time will influence the pup/dog’s actions in the future. It’s very cute to have a little pup chewing and playing with your shoestrings, jumping up on you when they want to be loved, or “nibbling” on your fingers. but, are you still going to think those actions are “cute” when your pup is full-grown! If you don’t want him to do it as a mature dog, don’t allow it while he is a pup!

One of the best things you can do for yourself and your new pup or dog is to crate train. Crate training is an easy method of housebreaking and also keeps your dog out of harm’s way when you cannot be with him. Crate training utilizes a wire or plastic cage. As you’ve no doubt noticed, c-a-g-e is a four-letter word. Most of us don’t like 4 letter words! Not only that but you don’t put a family member into a cage. You need to forget that word! You should refer to it as a crate or kennel – the dog’s very own den. Dogs derive a feeling of security from being in their crates.

A pet dog is not going to live in his crate all the time. He will rest in it, sleep in it, travel in it, and possibly even eat in it. When he is not doing those things in his crate, he will be with the rest of his “pack” – his people. Providing a crate gives a dog a safe place (as he grows and learns) from such hazards as electrical cords, poisons and owner’s belongings.

The keys to quick success are a watchful owner and a consistent plan of action. Your dog’s first experience with his crate should be pleasant. Place crate on the floor and allow dog to check it out. Do not force dog into crate until he has had a chance to thoroughly sniff the crate. Place a couple of small treats or his favorite toy just inside the crate. When he goes into the crate to retrieve the treat or toy, give the dog lots of praise. As soon as he starts to exit the crate, stop all praise. Repeat this several times, tossing the treat or toy further into the crate. The crate door is open at this point.

Next, toss in a couple of small treats or favorite toy to the rear of the crate as you are saying “kennel” or “crate” (any word can be used for this command as long as it is used consistently). Once the dog goes into the crate to retrieve the goody, give lots of praise and close the crate door.

MORNING: As soon as either you or the dog awakens in the morning, you must take the dog outside to eliminate. (Remember, it gets easier as the pup matures.) At the first whine or bark in the morning, you should open the crate door and say, “Let’s go outside” in a very matter of fact voice. Either carry a small pup (attaching a leash along the way) or leash-lead a larger pup/dog to the exact spot you want him to eliminate. Stand in one spot and tell him to “Hurry up”. (This command can be any term you want to use but must be used each and every time you want the dog to eliminate. This is very important.) Remember, this is not a walk; it is a “business trip”. When the dog begins to eliminate, praise quietly (Go-o-o-d dog). Allow sufficient time for urination and defecation. Move the leash back and forth to get a non-complying dog to move if he is just standing and staring at you. It is extremely important for you to 1) use a leash and 2) be there to praise the dog at least for the first couple of weeks when he begins to eliminate. (After 2-3 weeks, your dog should be able to go the “spot” on his own.) Do not allow the dog to turn this “business” trip into playtime! After the dog has eliminated, return inside, ending the “business” trip. It is at this time that you can then take the dog back outside to go for a walk, to play or to allow him to explore a fenced yard.

DAYTIME: The dog’s activities should be monitored throughout the day when you or a family member is home. When the dog sniffs, walks in circles or appears anxious, he should be leash-led to “the spot” you have decided will be his elimination area. Successful housebreaking depends on a quick response to such clues. If constant supervision (keeping BOTH eyes on him) is not possible, put him in the crate. If the dog should have an accident in the house, the area needs to be cleaned immediately with an odor eliminator or a 50% solution of white vinegar and water. The dog should never be punished for soiling in the house unless you catch the dog in the act. If you do catch him, tell him “NO” very firmly and immediately take him outside to “the spot”.

If the dog must be left alone for a few hours, he should be taken out for elimination immediately prior to your departure, then placed in the crate. When placing the dog in the crate and as you are leaving, be very matter of fact. If the dog gets the idea that you are upset or sad because he is in the crate, you will soon see that the dog does not like the crate. Dogs “read” our emotions and body language. Show a positive attitude about crate training, visits to the vet and all other aspects of obedience training. Having a radio playing, some safe toys and a blanket or crate pad should be sufficient to relieve most dogs’ anxiety of being left alone. If you have a dog that eats his toys or bedding, it is best that you leave those items out of the crate until he can be trusted. When returning home, you should, in a matter of fact manner, immediately get the dog out of the crate (again using your key words such as “Let’s go outside”) and leash lead the dog out to his “spot”. Again, make this a “business” trip.

BEDTIME: The dog needs to go out one last time before being placed in the crate for the night. The crate can be moved into the bedroom first, as the mere presence of the owner will be comforting. Again, if the dog should whine or bark, do not yell. Tell the dog “Quiet”* (“hush”*, “no noise*”). Either of these distractions should cause the dog to stop whining or barking. As soon as the dog stops whining or barking, tell him “good, quiet*, good”. The dog should follow your example and call it a day.

Keep in mind that a pup’s bladder is not as large as a mature dog’s. If, during the first few weeks, your puppy wakes during the night and signals you, (usually by whining or barking!) that he needs to go, drag yourself out of bed and take him out!! This will help to teach the puppy to alert you to his elimination needs. While you are outside (still half asleep and wondering why in the world you ever decided to get a dog!), try to keep a positive attitude, remembering that it won’t be long until his bladder will be large enough to “make it” through the night! Once the dog has eliminated, return to your nice comfortable bed and try to get back to sleep! 🙂 By the way, since you know the dog just eliminated outside, do not allow the dog to whine or bark to get your attention that he thinks it is time for you to get up and play! This is the perfect time to reinforce the “Quiet” command.

(*Masculine/feminine gender interchangeable, as is dog and pup.)

Check with your local obedience clubs for information on basic obedience classes. It will be money well spent – a dog that is a joy to be around!

Wishing you lots of joy and happiness with your faithful, loving canine!